Henry Vaughan, my Great-great-grandfather is a bit of a mystery, before 1841, with the birth of his and Charlotte’s first child. Several theories surround how he got here and what his name was but I’m going to do the unthinkable and accept everything on the certificates I have as gospel and introduce Henry to you. I can hear my Genie friends shaking their collective heads at my plan but hear  me out.


(* indicates that I have the certificate/document.)


40 years in the Colony, gives and approximate year of arrival as 1831 and an age of around 20 years.


Next I looked at their last born child, Rachael’s, birth certificate*; 28 July 1864. Father Henry Vaughan, age 53, birth place London, date of marriage 1 November 1858, mother Charlotte Chasmar, 1 boy living. (I can hear those wheels turning, nine children on his death certificate, in 1871 and only two in 1864! Charlotte must have been very busy!) I will explain, later.


Again taking it apart, age 53, gives a year of birth around 1811. Place of birth, London but London is in Middlesex.


Henry DIDN’T lie on Rachael’s birth certificate as there was only one child of the marriage, before her, all of the others were born before he and Charlotte married.


I’m now going to make some assumptions here and reason them out.


Henry states on his marriage certificate that he is a widower.  Searching the NSW Birth, Death and Marriage’s, I found an entry that reads; 825/1842*, Vaughan, Henry, Balfour, Anne, Sydney. Could this be Henry’s first marriage?  The time frame is right. The certificate shows a Henry Vaughan, Free Mariner, Bachelor, age 23 and Anne Balfour, Spinster, Age 22.  Religion is Presbyterian. No parents are listed, not birth place is listed, (Early Church Record) and the age is wrong, it would make his year of birth around 1819.   Still thinking about this.


Next was a search for a death of an Anne Vaughan. Using both the Ryerson Index and Trove I found a notice for a funeral of Ann Vaughan on 15 November 1858, late of Sydney. There are two entries on the NSW site. The marriage certificate says Anne was 22, when she married, making her year of birth around 1820.  I might go with the one who lists the parents, not the one that says she is 58.
Now for Henry’s parents and birth. John Vaughan and Mary Aldridge aren’t that common, but searching FamilySearch, Ancestry and Find My past found nothing. BUT leaving Mary out of the search lead me to find,  on Find My Past, in the Middlesex Marriage Registers, Vol 4; John Vaughan & Eliz. Aldridge, of Isleworth, lic, 10 July 1790.  Are these Henry’s parents? More searching required.


Using Family Search I found four possible children for John and Elizabeth but no Henry. More searching and on Ancestry I found London, England, Church of England, Baptisms, Marriages and Burials,1538- 1812, Christenings from Easter Day, 1810 to Easter Day 1811, inclusive, this entry; 27th Henry, son of John & Elizabeth Vaughan. Born April 20th.   The year 1810. Is this my Henry?? I feel that it is.


People use different names, Elizabeth night have been Elizabeth Mary or Mary Elizabeth. Mary could have been a nick-name. Other researchers have given me Elizabeth as his mother’s name. Anything is possible.


Henry’s arrival, well…   I have a convict, Henry Vaughan arriving in 1824, aged 29 years. This give a possible birth year of 1795, possible but the age doesn’t fit with anything else. Still searching.


Henry was both a commission agent and auctioneer, with rooms in King Street, Sydney and his residence was in Castlereagh Street, near Bathurst Street, Sydney. His will*, sworn on 5th April 1871 names, Henry Edward, William N and Frederick John,  and mentions young children and Charlotte. The value of his estate was £200.


He was buried at Camperdown Cemetery. His and Charlotte’s graves no longer exist, as part of the cemetery was made into a park in 1948.


Am I ‘barking up the wrong tree?’ I don’t think so, too many details match for me not to  have the right Henry. The other marriage certificate, could be Henry but investigation is needed.


Below is the table I drew up listing all I knew about Henry, from the sources I had. 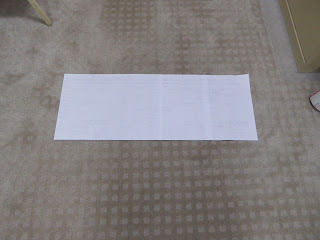 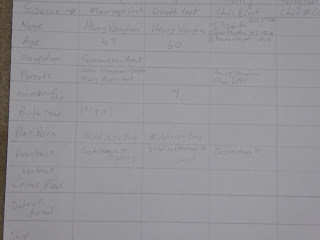 While I did it in pencil, I hope you can see some of what I entered.

Charlotte will be next week and then I'll start on the children. 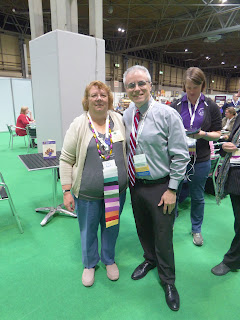 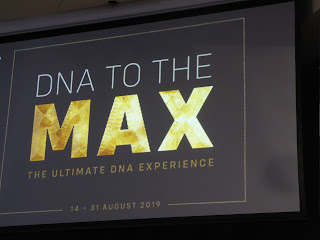 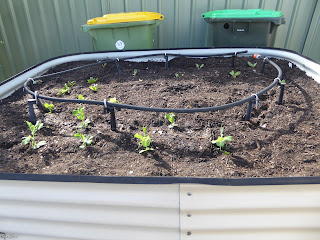 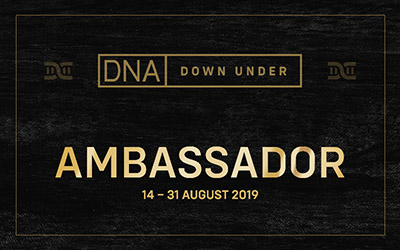